It Begins and Ends With A Story

As an avid gamer, the first thing I look for in a game is a compelling story. And I’m not alone. Most gamers are drawn to the overall experience a game can give them—one that’s immersive, emotional, as well as entertaining. It’s not enough to have stunning visuals and flawless mechanics. Game developers must blend rich, complex characters with story and gameplay. Not an easy task, but one that the team at Games Omniverse is focused on achieving. Great storytelling is at the forefront of Danika Dire. With the belief that story is where a good game begins, Games Omniverse’s mama duck, Angel Leigh McCoy, shares the process of developing the immersive story for Danika Dire while balancing all the other aspects of great game design.

Heather Reid: All story ideas have to have a genesis, a spark that starts the story burning. For Danika Dire, what was that spark? The character, the plot, or something else?

Angel: Thinking back, the mansion came first. I knew I wanted a location that the player could explore, that was creepy and mysterious. From there, we started building the characters. We discussed Danika and some of the other main characters, and everyone on the story team gave ideas. We came up with the broad strokes together, and then I went in and painted the details. The history evolved somewhat organically from the characters themselves, and I took it all the way to pre-pioneer days. The Dire family tree is quite a marvel to behold. Early on, we decided to do a webcomic with the help of Elan Stimmel to reveal the events that happen immediately prior to the beginning of the game. We had a lot of meetings and discussion about what should happen in it, and how it would affect Danika in the long-term. Once we had these backstories, then it wasn’t difficult to plot out what would be happening right now.

Heather Reid: I’m fascinated by the complexity of telling a compelling story with emotionally real characters while also having to weave that with challenging puzzles and evocative game play. How do you decide what to focus on first?

Angel: That is what makes the medium of video games so difficult: you have to focus on everything and come to some sort of balance so that it’s all good. It helps if you have an understanding of gameplay and of story because telling a solid story in a video game is no easy thing. We’re telling a first-person, single-player tale. This means we can control what the player sees and when they see it. We can easily control pacing as well. Nevertheless it gets complicated because there is a certain “sandbox” element to exploring the mansion. Once the player has visited a room, they can go back to it at any time. So, the story isn’t quite linear, and that makes it more complicated. Part of our challenge will be to make sure the player knows where to go and what to do next.

Heather Reid: Game development is such a collaborative effort. There are so many moving pieces, how do you keep track of them all without losing the core of Danika’s story? Do you story board each chapter?

Angel: Video game design is a fluid thing, and you can often feel like you’re surfing on this giant wave, clinging with your toes, and praying there aren’t any sharks under you should you fall off the board. We do not storyboard each chapter, though perhaps we should. What we do have are design documents (scripts). These documents combine information for the programmers about what happens where and how, as well as information on the dialogue happening at any particular moment. Because there are technical requirements to events, such as a tripwire being triggered or a variable being switched, it’s important that all this be written out in order. This is especially true at times when the story and gameplay get more complicated.

Here’s a small example of a script design document. 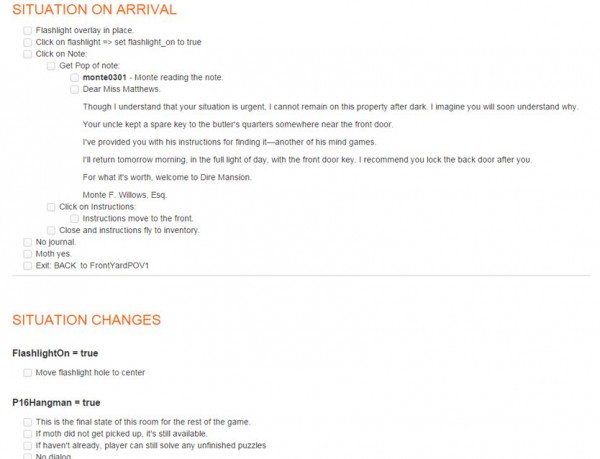 Heather Reid: Some game companies assign specific writers to develop different characters within the game, while Danika Dire isn’t as massive as the games from big developers, does Games Omniverse take a similar approach? Do you have specific writers dedicated to specific character arcs or plot lines or does everyone have a hand in everything? How many writers do you have on your team?

Angel: We have two people currently who write in-game content. Alison McKenzie, our lead puzzle designer, writes dialogue for the puzzles. And I write everything else. We have discussed having others take on journal entries for the various characters in the game, but we haven’t fully explored that yet. Because our story is so complex, it’s difficult to have more than a couple writers on the team. It has proven far more efficient to have one main narrative designer, who understands weaving story with gameplay, and then getting feedback from all the other team members who offer suggestions and critique. This way, I’ve found, it’s far less chaotic a process to develop the story.  When you’re making a video game, you have limited on-screen time for each character. Because of this, you have to make the most of every second, and it’s far easier to maintain a cohesive vision and logical flow of information if one person is driving the bus, so to speak. More than half the challenge with a writing team is communicating vision, so that everyone is on the same page and moving toward the same goals. This is extremely difficult to achieve and takes time to develop. A tight writing team can accomplish this. We’re starting small and we’ll build from here.