One of the phases of design for a game like ours is the Temp Audio phase. We brought in voice talent Folly Blaine to provide life to our main character’s lines. We did the recording in my office, with the equipment I use for the WilyWriters.com audio stories I do.

Why do temp audio? We wanted to have some audio files to gauge file size and to give the Unity scripters something to work with as they’re building out the game. This will help us accurately prototype the game and will allow us to see what we need to change and how before we’ve actually invested a ton of money into final recordings. When the time comes to do the final recording, we can easily switch out assets without throwing the game’s structure into chaos.

Because it was temp audio, this was something of a trial. Folly did a wonderful job (thank you so much, Folly!), and her temp audio will be her audition for the role when we put out the call for auditions. (For those of you interested in possibly auditioning for the roles we have, follow our Twitter feed and/or like our Facebook page where we will announce the audition guidelines.)

First, we learned that it takes much longer than expected. I went into the session thinking it would last about 2 hours. We had a total of about 450 lines for Folly to read. I was gauging my guesstimate on the time required to read a long fiction piece. And boy, was I wrong! 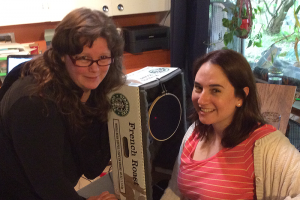 It ended up taking us 6 hours, and we had to rush through the last half. Part of why it took so much longer was because we had Folly read 3 versions of each line. That was overkill, especially for temp audio. We could have had her do two on most of the lines, especially if she nailed it on the first or second take——which she usually did.

We also spent far too much time trying to get the exact right read. If we had been working on Final Audio, then this would have been acceptable, but for temp audio, we were too perfectionist.

Second, we learned that there has to be at least three people in the room during the recording (not counting the talent). We had only two of us. I was watching the recording levels and listening for noise. Andre was marking down which take we felt was best. But, we were also trying to direct Folly’s performance. Doing that and the other tasks added exponentially to the time it took to capture all the voice-over. Next time, we’ll divvy up the responsibilities like this:

Someone will mark down which take we like.
Someone will direct the talent, look up references, check pronunciation documentation, etc.
Someone will monitor the recording levels and listen for unwanted noise.

Next time, we’ll nail it!

So, in conclusion, this seems like the perfect time to give a big shout-out of thanks to Philip Bache, who taught me all I know about directing voice talent. I found myself mimicking him, his phrasing, and his directions without even realizing I was doing it. I was definitely channeling my buddy Phil. Phil has directed much of the recording of Guild Wars 2 among many other great titles.

I also want to mention Mark De La Fuente, who made me aware that it’s important to listen for noise, voice talent stomach gurgles, pops, etc. He’s been the engineer on many recording sessions for ArenaNet’s Guild Wars 2.

(Thanks for the knowledge, my friends!) A tiny fraction of their immense skill seems to have rubbed off on me.

All in all, we had a marvelous time! We laughed and laughed throughout, which you can hopefully see in these photos. Thanks again to Miss Folly Blaine (voice actor and horror writer) for her time and talent!

For your reference, the equipment we used was this: