Hello everyone, Steeven Labeau of Games Omniverse here. In this Design Development Diary we will be taking a look at the design and development of the Mud Puppy. The Mud Puppy is a tiny monster that you will encounter during your stay at the Dire Mansion in the upcoming Danika Dire© game series. My entire design and development process was divided into three steps: cogitation, sketching, and finalization. Come with me as we take a quick walk through the steps to the final product seen below. 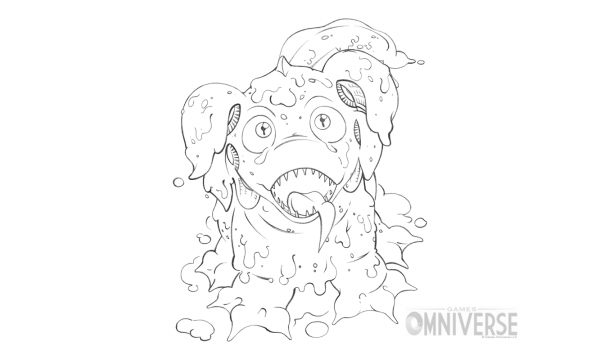 The first step is cogitation and like many other pieces I have worked on, it starts with the description from the design documentation. The Mud Puppy description was as follows:

This is a little creature from another dimension, a young one. It lives in a swamp world and is made up, almost entirely, of mud. Mud oozes from its pores.

I want it to be the kind of thing that people look at and go, “Awwww… it’s so cute!” It can look like a salamander or an actual puppy or whatever you come up with. It should look a bit alien. It can have a tail, no tail, 4 legs, 6 legs, or whatever you think would look cool. I imagine it with big feet and if it’s salamander-like, big toes.

In other cases where the descriptions are vague, I will usually ask for details about the context, a kind of mini-story featuring the creature where I can visualize its actions or behavior. Without having a physical description, these details are helpful to understand what I will have to draw.

Before starting my sketches, I write a few words in the corner of my sheet that will visually define the creature: cute, mud, “strange”, young, wet, smooth, big feet, and big toes. These are the details that should be obvious in the final design. At this point it is time to look for some references. Even if the creature is fictional, it never hurts to collect some research that will help you to make something coherent. Our Mud Puppy is the kind of creature that should have aquatic features that are inspired by real mud puppies, frogs, and salamanders. At the same time, our Mud Puppy would need to display some of the characteristics of a young dog, for cuteness. I already knew that I did not want a visible nose, but rather, an organ that would work like gills and that allows some sort of atmospheric breathing.

Sketching is the second step and where you will learn a secret about the way I work. You see the secret is that for everything that I draw, the very first series of sketches is absolutely not representative of the final version! This early sketch work often remains a secret as I never show them. They are like warm up drawings that help me to familiarize myself with the subject. This allows me to identify its potential difficulties and to have a better idea of what I do/do not want to do for the next steps. 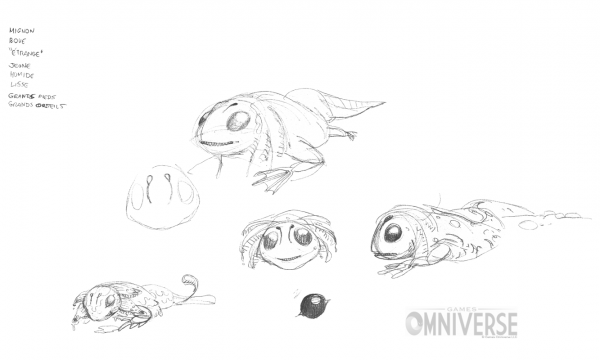 What will become of our beloved Mud Puppy? At this point, I know that I want gill-like organs. I also know that the reptilian legs will cause me issues since it needs to be sat. Now let’s move on to the second round of sketches and that nose. I thought I wouldn’t like the nose and I was right! 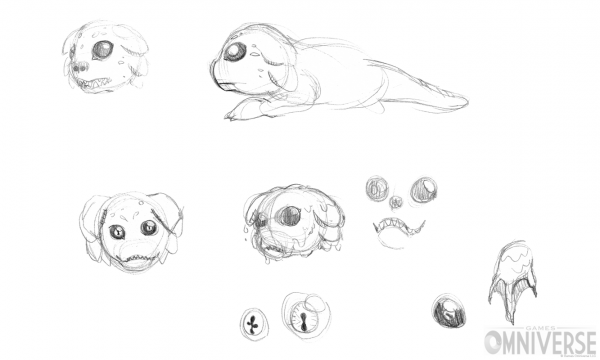 Interesting features begin to emerge: the eyes, the shape of the mouth, and the breathing organ. I will try to preserve these in the final version. The questions start to come to me as well, because I cannot forget that this creature is covered in mud and the general shape of the body can be affected by its presence, especially if there is a lot of mud. I note to ask for additional information on this detail when I submit the sketches and I also do a variation on the eyes to have an element of comparison. The tail would be useful to swim underwater, so I keep this idea. The two legs will not be enough for easy movement on land and six legs would be more difficult to draw when it is seated. Another consideration is the fact that it will move differently with more legs and this could have consequences on how it will be animated, but it’s important to do something that is visually interesting. I opt for four legs and then send the “chosen ones” of my sketches to get feedback on this potential direction. 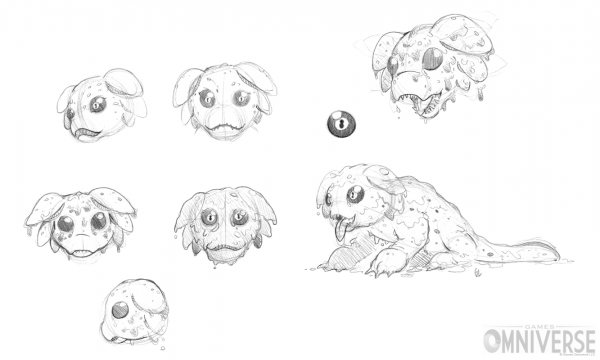 The shape of the creature is affected by the quantity of mud, but the way the mud flows is affected by the shape of the creature. Knowing what the Mud Puppy looks like without the mud is very helpful to the future designs. After receiving feedback from Angel and the team at Games Omniverse I learned what the favorite designs were and was asked to add more expressiveness to the eyes. I then started a new round of sketches closer to the end result.  Even if I do not use the sketches they are important, to be more familiar with what I have to draw at the end. These sketches will also be helpful if a new series of images featuring the Mud Puppy are needed in the future, I will be ready! 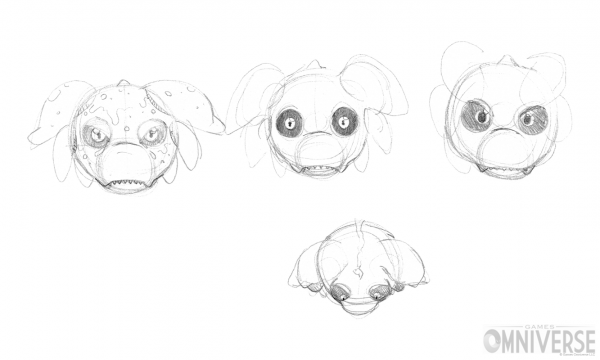 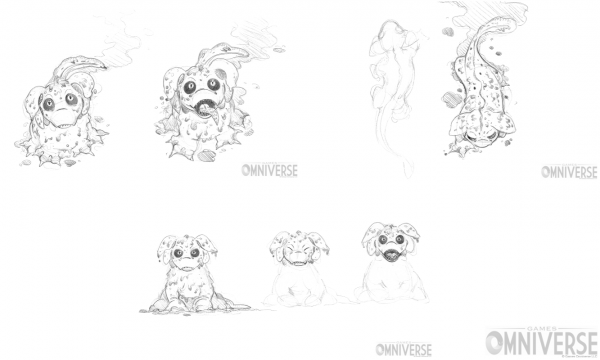 When the team was shown the concept sketches they all wanted to adopt one, I know I am on the right track! This version has succeeded and no further modifications are needed. It’s time to finalize the variants that have been requested in the design documentation.

In the finalization step, I switch from my comfortable pencils and paper of the drawing stage to a graphics tablet to create the final digital designs for the team to pass on down the pipeline. One of my most valuable tools is my light table, if I need to quickly see the result of a modification without starting from scratch or if I want to compare different options my light table is where it happens. There are also other cases where the light table is handy such as, if I want to preserve a detail that I appreciate in the sketches or if I want to get “clean” pencils early. This is especially helpful if I am not inking my work and my sketches are detailed enough. Then the finalized versions are scanned and combined into a single PSD (Photoshop) file. 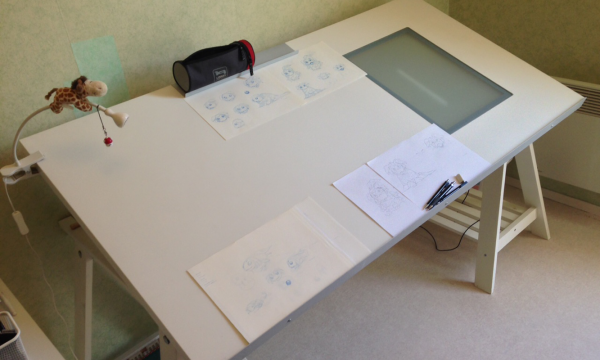 My tools for the task were: several sheets of A4 paper, mechanical pencils, a large eraser, and a smaller retractable eraser. In finalization I note that some of the details such as, the shadows and black eyes do not appear to leave much room for the colorist if they want to try different color combinations. However, at this point I do not know what it will look like colored and my main focus is to provide the most exploitable and enjoyable file for those who will work on it after me. If they have no need to make corrections then they can concentrate on their part of the work and provide the best end product to Games Omniverse for use in the games that they create. With all my fingers now crossed, I am ready to submit the design for the final approval. 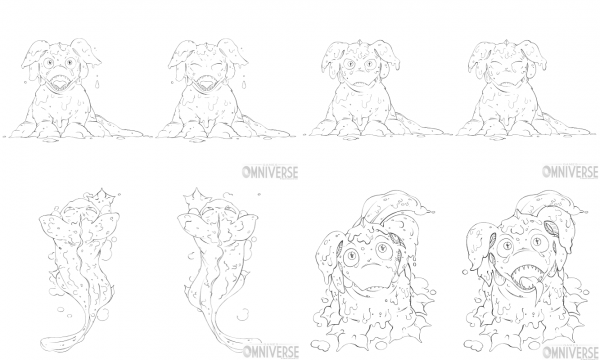 I cannot wait to see the in game version, how about you? Wrapping up my work on the images of the Mud Puppy, the difficult part was finding a balance in the variation sliders that lead me to the results you see above. It needed to be different, but not too weird, expressive, but not too cartoony, and muddy, but not extremely disgusting.

The thing that I appreciate the most, but also have the most apprehension about, is people’s first and immediate reaction when their eyes see my work and understand it without me having to explain anything. I think this is because they will not see the reflection of the entire design process, they merely see the end result. What may seem clear to me can be interpreted differently by others and I am not always present to explain my vision. The immediate understanding of my work by others is, to me, what makes the difference between a potential failure and an “accomplished mission”!

Content Created by: Steeven Labeau and Daniel B. King