Dev Diary: From Paper to Pixels

There comes a time in the development of every artist when they have to drastically change-up the way they’ve been doing things for years, decades even, either because what they’ve been doing up to that point won’t or doesn’t work anymore… or just because they need to try something new. Sometimes… it might even be both. 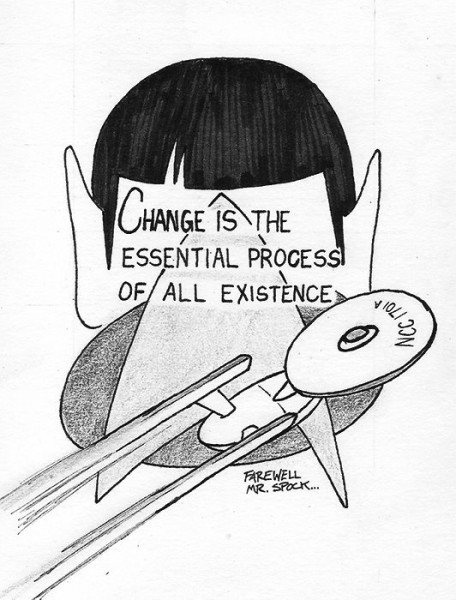 For me, that moment came when I was first hired to sling ink for Games Omniverse. Up to that time, I was a simple pen and paper kind of guy, unless I was rattling cans at a wall somewhere. Of course, when you’re working on a video game of any kind, pen and paper don’t help a whole lot beyond the initial conception stage… and spray paint is just going to ruin your monitor. It didn’t take me long to realize that my hopes of doing most of my work on paper and just converting it over to a digital format wasn’t going to work, and that realization meant that it was time to put down the pen and pick up a stylus… which, for me, was a pretty nerve wracking realization on many levels… especially on the comfort zone level. Thankfully I had a pretty strong background of photo manipulation in Photoshop, so I was pretty familiar with the new toolset I was going to be working with. Even more importantly, when I eventually got my first drawing tablet I discovered that working with a stylus on a pane of glass isn’t really all that different from putting pen to paper… and in some cases, it’s a hell of a lot easier to work that way. It also helps that my grandma likes to knit… but more on that later. 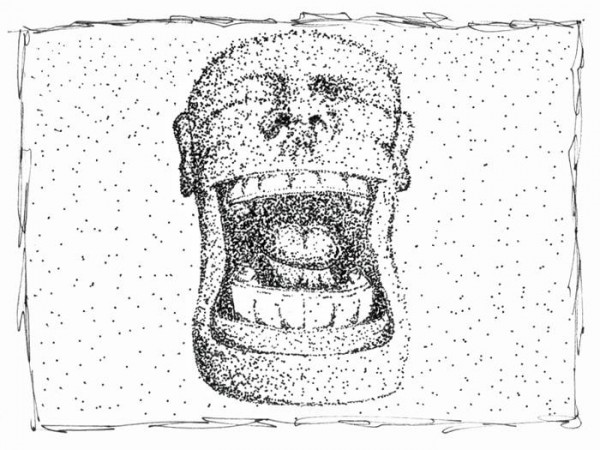 The transition from paper to glass isn’t an overly hard leap to make, but it does come with its own set of both ease, and problematic processes. Personally I was amazed, after really only having drawn lines in Photoshop with a mouse before that point, at how clean everything became with the stylus. And, as someone that worked with a lot of pens and markers jumbled about the desk when I was working, it was really freaking sweet to be able to change my line size so drastically with such light touches on the tip of the stylus. Having all those pens and markers one click of a mouse away wasn’t half bad either. But beyond just cleaning up my workspace, I was really struck with the difference between line work on paper and digital line work once they’re side-by-side on a computer screen. If you’ve ever scanned an ink piece in from a flat panel scanner before, you know what I’m talking about. The way the ink bleeds out into the paper fibers becomes so much more obvious… and jarring. So when I saw just how clean and smooth of a line you could make once you’re drawing digitally, I was pretty well hooked. 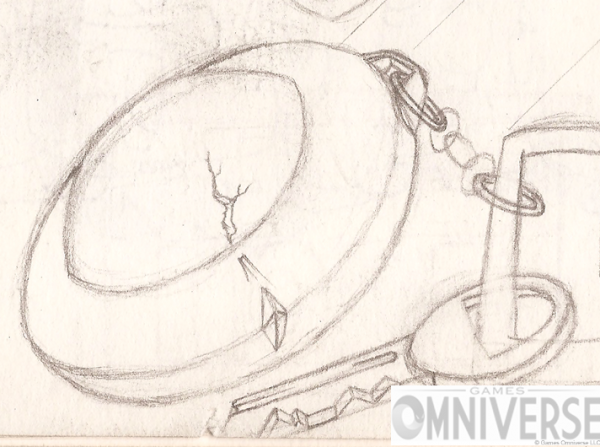 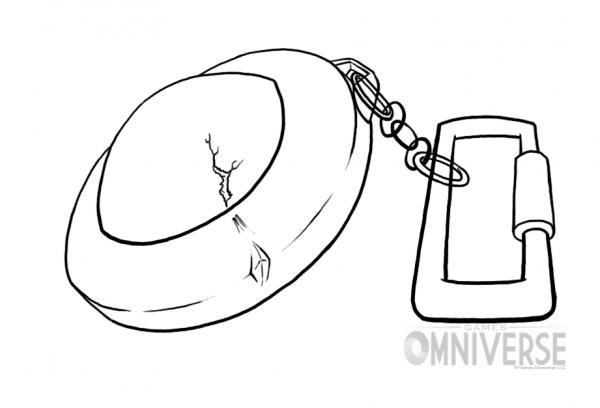 This is where my grandma comes into the story… as I said, she enjoys knitting, and when my kids got these nice, knit gloves with no thumb or finger pieces… I knew pretty right away that I needed to have my own. See, the only real issue I had with drawing on my tablet was how the glass surface had just enough grab on my palm to hitch the long lines I would work on in some of my Games Omniverse pieces. As soon as I saw those gloves, I knew my last hold up in regards to working on a tablet was gone… she made me a couple on request, and they have proved to be almost as important to my work as they tablet has been. Once the friction of glass on skin was gone, I was able to pull out lines like never before. This increased accuracy, and the rate at which a piece could be worked on now has been pretty incredible for me… I honestly never thought the difference would be as stark… but also as easy to work around, as it was. 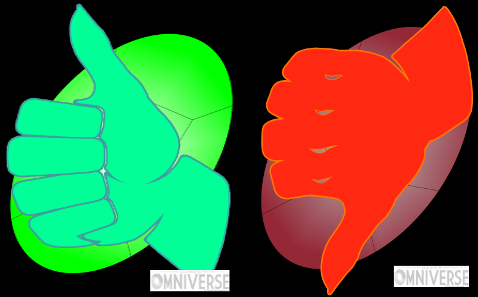 In order for the people painting and programming a 2-D game to be able to do their jobs easily, the environments you see are drawn up with each item on its own layer in the scene, especially any that will move or be manipulated in some way. This allows us to make sure that moving all or part of an object doesn’t leave a hole in the background of a scene… and though, when I’m writing it out like this, it sounds profoundly easy, it can be one of the biggest hurdles you first run into. On paper you get used to constructing a scene around the foreground objects, sometimes with little thought as to what’s maybe going on behind them, but in this job… that just won’t work. You’ve got to be able to envision any scene you’re working on with AND without things like- doors… walls… chairs… rugs… or pretty much any other thing you might be looking at in that scene. Of course, when you get done with a piece like this, it looks like a jumbled mess of lines… but I’ve also learned it’s kind of fun to go through a piece I’ve finished just turning layers on and off and watching the scene build up or fall apart… yet it all continues to work together just fine. I quickly had to make it practice to just open a new layer any time I started putting down lines on a new object… but admittedly some of my early pieces for the company did suffer from a serious lack of layers. I think the one thing I’ve learned for sure working on these Games Omniverse pieces is- you can never have too many layers. Opening a door? New layer! Moving a piece of paper? New layer! Find a scrap of cloth hidden inside a box? NEW LAYERS!! I think you see where this going… but honestly, if you take nothing else away from this reading it should be- if you’re thinking of ever getting into the work of drawing scenes or items for a game like this… layers are your best friend, and don’t ever be afraid to add just one more. 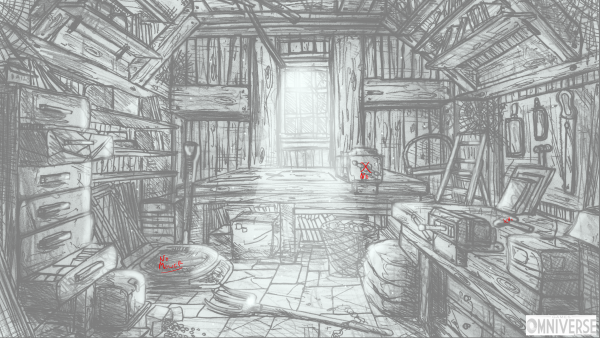 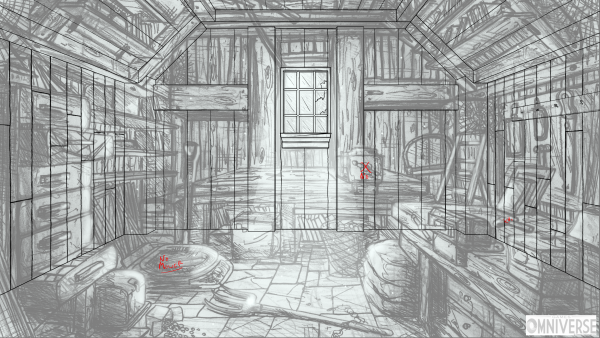 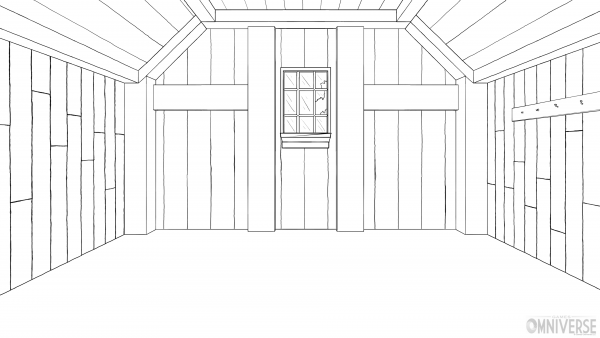 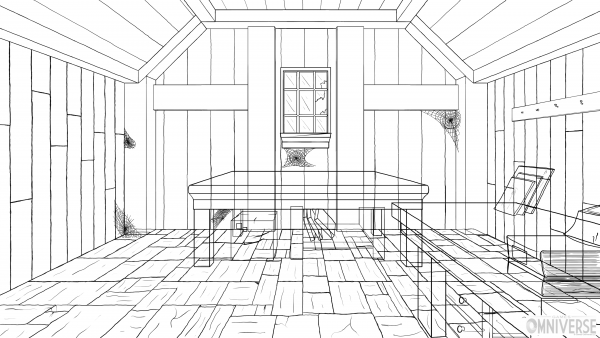 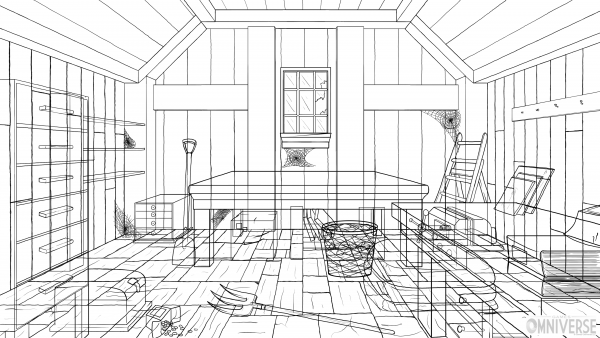 But all I’m getting at here is, in anything you do that means something to you… writing, drawing, teaching kids how to spit watermelon seeds off a bridge… don’t be afraid of moving off into a new direction with how you approach your work. It will only help… not only with the piece in front of you… but with every other piece that comes after. I was always a bit put-off by the thought of making the switch to digital art, and losing a lot of the “feel” of a piece that I was used to… and while I may not get the same feel when I’m working on an Games Omniverse piece as I do when I’m putting pen to paper and lining out a new illustration, that has proved to be far less daunting of a change to make in the way I work than I ever thought it would be. It’s nice being able to do so much with a tablet that you just can’t do, or at least can’t do as easily on paper… and honestly, things I’ve learned from working on the tablet have easily translated over into my pen and paper work making those pieces even more solid. Win-win!

Thanks for reading this development diary and if you are still hungry for more content visit some of our other pages to see what we have to feed your fill.