“Grady Dire and the Desert Heat” — a tease

The following excerpt is meant to tease. It’s a short story being released in portions, but only to our mailing list subscribers. To read it, sign up for our newsletter in the column at right!

This story is an adjunct to the Dire Multiverse audio drama. It may contain spoilers if you haven’t listened to all the episodes so far.

Grady Dire and the Desert Heat 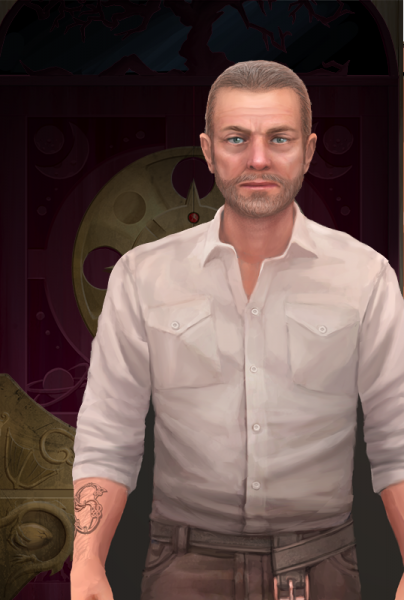 Grady Dire leaned back in his favorite high-backed armchair and swirled the bourbon in his glass. A smirk graced his mouth as he studied his guest, I.B.I. agent Rhaegar T. Paine. He hadn’t known the man long, but he already liked his no-nonsense approach and sneaky sense of humor.

“Dana Lessington,” Dire said. “What are we gonna do about her?”

Paine shrugged. “What we always do. Catch her and send her back where she belongs.”

“You’d send her back knowing she’d be in danger?”

“That’s not my problem. She can find a different realm to run to. Earth is off-limits. It’s too innocent here.”

Grady couldn’t disagree. He knew better than anyone just how fragile the Earth realm’s psyche was. It wasn’t ready to learn about the multiverse. “Why don’t we take her to an open realm, instead of sending her home?” he suggested.

“I can’t do that,” Paine replied. “Procedure. She needs to go back to where she came from. You trust her enough to help her?”

Grady laughed wryly. “Never ever trust a woman from Desert. Isn’t that what they say? Let me tell you a story about the first time I went to the Desert realm.”

Paine lifted his whiskey glass in salute and relaxed back in his chair. He was well familiar with Grady Dire’s stories, and they always delivered a thrilling ride.

Grady gathered his thoughts, smiling ruefully. Then, he began.

“I was young, dumb, and… well, you know the saying. I’d only been the guardian for a year or so, maybe less, and I was so eager to explore the multiverse. It was a sickness back then, if I’m being honest. Looking back, I see that I left Earth unprotected more often than I should have. It’s a miracle it wasn’t invaded. But, that’s neither here nor there.

“Desert. I had always loved the movie ‘Lawrence of Arabia,’ and I fancied myself something of a ladies’ man, so I had high hopes for a memorable adventure.” Grady laughed with nostalgia. “I met her the moment I stepped through the portal into the realm. She was holding the reigns of a hyllo—similar to a horse but with tusks—and as I watched, she leapt up onto the beast’s back. It was the most beautiful, graceful vision I’d ever seen. She reigned the animal to stillness and spotted me.”

Grady paused a moment, lost to the memory, then met Paine’s gaze. “Was it love at first sight, you’re wondering? Well… I don’t know if it was love, but I wanted her from the moment I laid eyes upon her. She had long black hair that flowed like a waterfall down her back, and eyes as dark as a moonless night. And her figure… mm.

“Because of her, I let my guard down, and that was my first mistake.

“I spent the next three days with Omana. She took me to the oasis, where her tribe had settled, and we emerged from her tent only to eat, bathe, and tend to other bodily needs.

“I was in heaven until one day—quite spontaneously—her eyes rolled back in her head, and she said, ‘A cold darkness sniffs at your heels, guardian. It will gut you and refill your belly with its own foul offal.'”

Grady raised both eyebrows, “Needless to say, that was a mood-killer. And she wasn’t wrong.”

TO BE CONTINUED… Sign up for the newsletter to receive the rest of the story as it’s released.