Where to Try (and Buy): Gamehouse 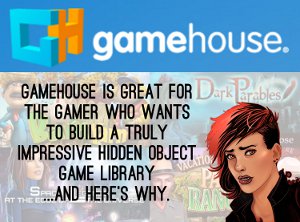 After learning a bit about what hidden object games and adventure games are, you’re probably all fired-up to start playing some of these and finding a game or two that you’re going to love playing over and over again. But how do you find them?

Even after doing a Google search for “best hidden object games,” you’re still probably going to be confused by the search results, many of which are sponsored links. Of the links that aren’t sponsored, you’ll start to see the same distributors and publishers pop up over and over again.

But what makes these distributors a great resource? Which distributors and publishers release the best games? After polling members of the Games Omniverse development team and our alpha testers, we’ll be shining a spotlight on some of our favorites.

The oldest distributor on this list, GameHouse has a deep catalog of all sorts of hidden object games ranging from the fun, simple, and light-hearted (Barn Yarn, the Vacation Adventures series) to the dark, mysterious, and supernatural (Dark Parables series, Sacra Terra series) and even more in-between. The deep amount of respect that is shown towards these third-party titles is evident from the way that GameHouse discloses the developer’s name in the vital stats box for each game as well as making it easy for you to find all the games created by those developers which are offered on the GameHouse site.

As you’ll see with others on this list, there are three ways to acquire a game and play it without interruption by ads:

The advantage to downloading the demo of a game and playing it for up to an hour is that you have that much time to decide whether or not you like the game enough to want to continue playing it. For the most part, by the second or third hidden object scene, you’re probably going to know whether or not you like the gameplay elements or the story enough to keep playing.

Most of us developers and alpha testers prefer to buy our games, and GameHouse regularly offers limited-time only discounts on their games, sometimes as much as 30% off of the regular price. Since many standard games are only $9.99, this means that if you wait for the right sale, you can pick up a brand new game like the sci-fi themed Space Legends: At the Edge of the Universe from Red Hedgehog for as low as $6.99.

For the same price of $6.99 and a continuing monthly membership of $9.99 after, you could also sign up for their FunTicket Duo which allows you to trade in FunTickets for two standard games for the price of one (or one Platinum game for the price of a standard game; unused tickets expire after 60 days). For the new subscriber who doesn’t want go back to a game once he or she has completed it and wants to play “all the games,” this is a great option.

However, if you’ve got limited space on your computer for games or you want to be able to play your games anywhere, anytime, the FunPass might be the option for you. For a monthly fee of $19.99 or an annual fee of $99.99, you can play over 2,300 of their standard games and some of their Platinum games for no additional fee using only your login credentials on any computer.

Top both of these options off with the ability to earn additional bonuses through their Rewards program and extra savings on other purchases, and either solution is great for the gamer who wants to build a truly impressive hidden object game library.