As a fan of several forms of geek media, there are some creators out there who are just so special, so innovative, and have such unique voices where when I hear that they’ve produced something new, I find my hand instantly gravitating towards my wallet.

Ursula Vernon, creator of the Hugo-award winning Digger web comic and the Dragonbreath series of children’s books, is one of these folks. In the fantasy genre where the grim and dark fight with the soporific and fluffy, Vernon’s positively pragmatic characters march with stoic faces to their epic destinies.

A life-long Dungeons and Dragons gamer whose home game antics have her LiveJournal readers begging to be a part of her table, Vernon is now giving her audience a chance to experience what it would be like to be a character in one of her worlds through an interactive fiction/card-based game called Cryptic Stitching. I reached out to Vernon by email to talk a bit about what it’s like to be a one-woman game developer.

When did you first realize that you liked playing games?

Oh, lord…that’s a long way back. Probably playing Adventure on my father’s computer. I was the first one in the family to figure out the “plugh” room. I must have spent hours hammering on that thing…

What were your favorite games to play as a child? How has that changed as you became an adult?

I loved text adventures, because that’s what we had. (Still do, actually.) I also played a lot of Sierra games as they came out, and must have burned a thousand hours or more on Hero’s Quest I, back before it became Quest for Glory. And Rogue, of course.

As an adult, I’m pickier, probably because I have so much less free time. But games have gotten so incredible these days—sometimes when I’m playing Skyrim or Assassin’s Creed 2, I stop and go “Whoa. Who knew?” 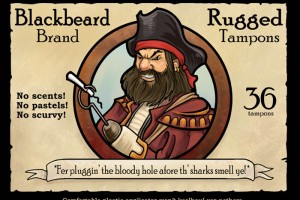 Some of my favorite art pieces of yours seem to have been created “accidentally”, like the inspirational monsters or the the Red Wombat Tea Company soaps. What was the genesis for the world of Cryptic Stitching?

Well, I had started making stuffed animals—art dolls, I guess you’d call them—and I was making this little world up in my head where they lived. So I made a teddy-bear hunter and then he needed somewhere to live, and then I put together this weird little sheep who looked very traumatized and decided he was the leader of Wool-Tribe, and pretty soon this whole backstory started to evolve.

What made you decide to create it as a game rather than a new Web comic or a children’s book series?

Pure serendipity. A friend had just told me about the StoryNexus engine and how it was in open beta, and I went to look at it. It looked really cool—I’d played Fallen London back in the day—so I made a card as an experiment, and then another, and then about eight hours had passed and I was up to my ears in this world.

I think I sensed there were epic possibilities here, and I can’t bear the notion of starting another webcomic epic—my last one ran to nearly 800 pages and took seven years of my life! And I also had a feeling this wasn’t quite a children’s book world—or if it was, it was one sufficiently weird and dark in places that most publishers were going to balk. (I know it’s strange to think of a dark story involving stuffed animals, but parts of it start to get awfully weird when I look at them closely…)

The phrase “teddy-bear hunter” says enough to me, frankly. How has the digital age affected your storytelling and gameplay design?

It’s made it so much easier, at least when you’re talking about something like StoryNexus, or more recently, Twine. I tried to make a text adventure when I was a teenager using—don’t laugh!—AmigaBasic. There is just no comparison!

What’s it like drawing a long-running series, and how would you compare that to game design?

There’s a certain lack of instant gratification, I have to say. For the webcomic “Digger,” while it was a very, very long comic, I uploaded pages twice a week and had fans speculating. Working on a game, it’s a long process of just hoping that you’re producing something that doesn’t suck, and you don’t get any feedback until you get to a stage where someone can play it.

The nice element is that if I get too busy to work on Cryptic Stitching—this summer has been total death, for example—I don’t have people left hanging. When you’re working on a webcomic, as soon as you start missing updates, you start losing readers. With a game that isn’t out yet, if it goes another month long, provided you haven’t been putting out release dates, no one knows you’re behind. *grin*

When you start working on a long-form story, do you have a plan for the story well in advance and an end-point in mind?

Somewhat, yes. I don’t plot things very tightly—it’s more like a road-trip where I know I have to end up at point X eventually, but it’s fine if I wander around taking side roads and stopping at the roadside attractions.

I’ll often start with no idea where I’m going, and figure it out as I go along, but there generally comes a point where I get a sense of the map, so to speak, and go “Aha! I will eventually need to be at X, and I want to hit A, B, and C along the way.”

(I do know Cryptic Stitching‘s ultimate road-map—it’s a three-chapter story, although the first “establishing” chapter is the long one, and the final showdown chapter is pretty short.)

I’m sure that your fans will be totally pestering you to reveal some of your plot in advance. Do you prefer to start with the character art or the story?

Hmm. It varies, really. I often start with the story, but sometimes when I’m fooling around with art, a story shows up to go with it! It depends on what I’m doing. For a pitch to a publisher, I’ll write a story and then cook up the characters designs, but for more organic personal projects, the art may come first.

Who is your favorite character in the game or the backstory to the game?

I am very fond of Quippet, the Shaman’s Apprentice, and also of Crazy-Wool the Shaman. Crazy-Wool is kind of a grumpy Sheep, but the more I have written about him, the more I like him. And Quippet is sweet and hears voices from the spirit world that are all very nice to him. 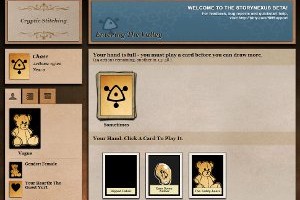 You’ve written in your LiveJournal about the technical challenges of designing the game. As a (mostly) one-person dev team, what resources have you found invaluable in helping you solve your programming problems?

*laugh* Crying a lot! I have done everything wrong three or four times over. But developer pages are an invaluable resource, and as I work on porting Cryptic Stitching over to Twine, my husband (who is a sys-admin) has been enormously helpful. There’s been a few times where I’ve told him “I need a thing that does this” and he’s gone off and coded it for me. (There’s also been a few times where he’s told me “Surely you need this!” and made things infinitely more complicated than it needed to be, because he has this sense that things ought to be EFFICIENT. I am told by my friends that this is an Authentic Dev Experience when dealing with engineers.)

Forums are always very helpful, too—in both incarnations of this game, the forums have been a big help.

At the end of the day, most of it is just grim trial and error, though.

What have been the most frequent comments by your alpha and beta-testers? How did you account for the problems?

The biggest complaints on the Story Nexus version involve the frequency with which cards come up. That’s a specific quirk of the Story Nexus engine and only partially within my control, so I did a lot of fiddling with the elements I could work with. The problem was to get cards to come up just rarely enough that people would be pleased to see them, and still have a sense of…oh…time elapsing?…but come up frequently enough that people wouldn’t get frustrated waiting. Since some cards were required to move the plot along, and you only have limited numbers of turns, waiting an hour to get the turns to just draw the same cards over and over again could get maddening!

The elements I was able to tweak, I did, and got the story moving along at a pretty good clip, but people would still be left waiting for some rare events, like merchants or rare animals to hunt. One of the nice things about the Twine engine is that since it is structured very differently, I can make a—I got in the habit of calling them “cards,” even though they’re “storylets” now—merchant hang around the camp fairly regularly and the player can choose to visit them or not, and it doesn’t slow gameplay having them there.

What are some things that you learned about yourself while designing and play-testing this game?

I am capable of thinking rigidly [and] logically—if X, then Y, if not-X, then not-Y—if I have to. It doesn’t come naturally and I have to focus pretty intensely on what I’m doing!

Do you believe we’re at the beginning of a renaissance of interactive fiction? Why or why not?

I’d like to think so! I worry that some of the persistence of interactive fiction is people like me who remember Zork and Adventure with such passion. But at the same time, interactive fiction allows for such amazing stuff to be made by individuals without gigantic game studios behind them, and you can make very personal stories, or very experimental ones. As the technology gets more accessible, we see more daring and more experimental things—that’s true of app games as well as interactive fiction—so I’m hoping we’re seeing a renaissance of all kinds of independent games!

What does the future release schedule for Cryptic Stitching look like?

At the moment, I’m still porting it to Twine. Failbetter Games did a fantastic job with the StoryNexus engine, but they’ve halted development for the moment and that makes me a bit twitchy. I like Twine because it’s very flexible, even if the interface is wildly different. So the next release is going to be a reboot of Chapter One, as a Twine game. (I don’t have a specific date for that—I’ve gotten probably half of it transferred over, but whenever I have a deadline for a children’s book that needs 150 illos in three months, it goes on hold until I’m done!)

Do you think you’d be interested in licensing it out to a bigger developer or publisher? Why or why not?

I’d absolutely be willing to license it out, if someone wanted to do some of the grunt work—I enjoy writing the flavor text, but things like game balancing could easily be written by someone else. I wouldn’t want to give up all the creative control, though—I am very fond of the world and would hate to see it go in a direction antithetical to what I intended.