Why a Hidden-Object Game? 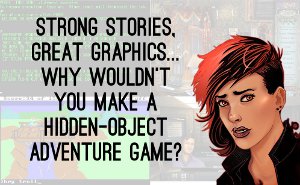 When it comes to playing video games, I’m a relative newbie. The first computer games I remember playing came on 5.5-inch floppies, and I had hours of fun monopolizing the Apple IIes in my elementary school library exploring Oregon Trail and being frightened by this one math game where you had to solve equations displayed on alien spaceships in order to fire a missile to shoot them down. In fact, that alien math game made me so anxious that I didn’t touch a game on a computer again until after I graduated from college.

Because of this, there are a ton of different games and genres I’m now just beginning to explore, ranging from sandbox games like Minecraft to adventure games like Hector: Badge of Carnage. Which got me thinking about Danika Dire and the type of game it’s going to be.

With puzzles, mini-games, the ability to search every room for items you need in order to progress to another room, and a rich story filled with great characters and an overarching plot, the Danika Dire series is going to be a mash-up of genres called a “hidden-object adventure” game. To understand what that means to us and to you, though, you need to understand more about what these genres are and why they appeal to us so much.

“You are in a maze of twisty little passages, all alike.”

The adventure game got its start back way back in the mid-1970s and was developed and distributed via the nascent Internet by a programmer and role-play gamer named William Crowther. Using his spelunking and caving hobby as a template, the first adventure game was a text based romp through an underground cave system called Colossal Cave Adventure (later known as Adventure). Based on an actual cave system in Kentucky, Crowther’s descriptions of the caves were so realistic that one could use them to navigate the real Mammoth Cave.

However, you could find more than just stalactites and stalagmites in these caves. Using his experience as a role-play gamer, Crowther filled his textual caves and the surrounding woods with giants, snakes, bears, secret treasures, secret passwords, and tasked you, the adventurer, with successfully navigating all the cave’s branches in search of the highest score.

Other key titles in the adventure game genre include Roberta and Ken Williams’ Mystery House (the first graphical game), their King’s Quest series (first game to use third person perspective), and Maniac Mansion from LucasArts (first game where you could select items to use them rather than using text). Because of these new innovations, the adventure game market was very popular in the 1980s, culminating in Robyn and Rand Miller’s Myst, the first adventure game to use pre-rendered video, audio, and graphics.

After a fallow period, the adventure game market surged back into prominence via games like the Phoenix Wright series, Heavy Rain, the Sam & Max series, and the Kickstarter-funded Broken Age. Part of the reason why these games have become popular again is that a game developer can tell a richer story with the adventure format. There’s a strong focus on telling a complete story (sometimes with multiple endings), and the characters have strong agency and their own internal narrative. Another reason for the genre’s resurgence is that adventure games are easier to play and complete within short bursts of time. Both of these elements are key components to why we think you’ll like Danika Dire and to why we’re making this particular game.

But perhaps the strongest reason why we chose the adventure game genre and think that its elements are the perfect vehicle for telling the story of Danika Dire is that it’s the kind of game that gets us fired up, that we choose to play in our (rare) spare time, and that we love discussing with others.

I spy with my little eye…

The hidden object game genre is familiar to anyone who has ever had to take a long journey by car with their parents, read the legendary Highlights magazine, or enjoyed a series of books called I Spy or Where’s Waldo. The object of the game is to find something in your surrounding area or in a picture (either photographed or drawn) by examining every detail of the scene or asking questions about the object.

Originally designed as games for kids, Bill Meyer, Adrian Woods, and Patrick Wylie at Big Fish Studios quickly realized in 2005 that the format could be enjoyed by an older audience. In their first hidden object game Mystery Case Files: Huntsville, the player was an amateur detective who had to first discover objects that were hidden in the picture of a crime scene location and then once enough objects had been found, solve a sliding-panel puzzle in order to reveal the culprit and progress to the next level.

By creating a narrative for the setting of the hidden objects, Big Fish Studios was able to introduce the hidden object genre to a whole new audience of older casual gamers who liked solving puzzles, but didn’t enjoy the other aspects of traditional puzzle games or adventure games. MCF: Huntsville was quickly followed by other mystery hidden object titles in the same series, and other developers started to create or re-style similar mystery games as well such as the Dana Knightstone series, the Nancy Drew series, the Dark Parables series, and even a game based on the TV show “Castle”.

What we like about hidden object games is the way it replicates finding clues at a crime scene and discovering interesting objects in your granny’s attic. At the same time, we also think that by having you delve into the world of Danika Dire—one lusciously-depicted screen at a time—you’ll be able to immerse yourself more into Danika’s story.

But ultimately, when you play the games in the Danika Dire series, we would like you to get the feeling that you’re exploring her world and helping to solve her very strange mysteries.

Though hidden-object puzzles and adventure game mechanics are the key components to the Danika Dire series, they aren’t the only types of puzzles and mechanics that will be present.  After all, as gamers and fans ourselves, there are a myriad of things that we enjoy about video games that we want to share with you through Danika Dire.

And speaking as the newest member of the Games Omniverse team, I am definitely eager to play this game… especially since there will be no scary math aliens at all.