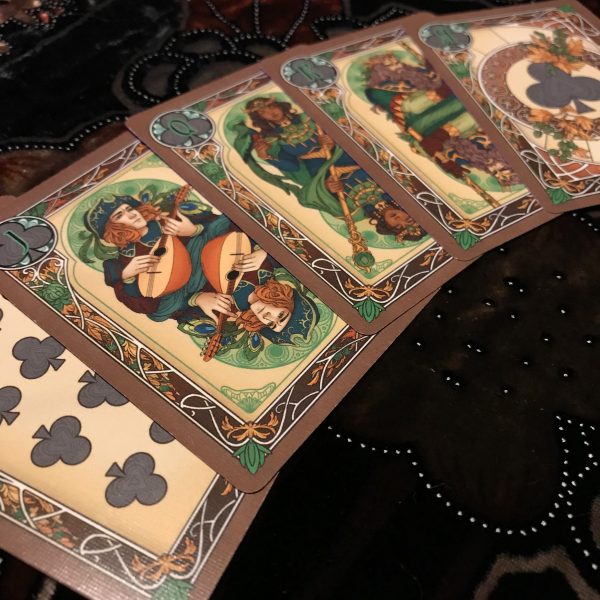 Cards: They’ve been around since circa 868 C.E., originating in China. The versatile vehicle for games spread to India and Persia, onto Egypt and, eventually to Europe in the second half of the thirteenth century.

Of course, these early cards weren’t without controversy. Official ordinances from 1367 banned playing cards in Bern, and the first written mention of playing cards in England dates from 1463 when the courts under Edward IV banned importing playing cards.

These original playing cards look a bit different than those commonly used today. Although they were comprised of four suits of thirteen cards (ten pips and three courts), the originals were hand-painted and therefore expensive. Their symbols evolved, as well, having first been regionally influenced. For example, Mamluk suits originating in Egypt included cups, coins, scimitars, and polo sticks; their court cards were a King and a First and Second Lieutenant. In Europe, however, the suits included acorns, bells, leaves, swords, flowers, deer, wild-men, birds, and beasts and the courts depicted a King, a Rider, and a Footman. The French developed the familiar hearts, diamonds, clubs —perhaps modified from earlier acorns— and spades; its court cards replaced the rider with the Queen.

Playing cards have long acted as conduits of popular culture. From fables, romances, satires, and burlesque scenes to political propaganda, cards reflect changing times. In the 1400s, court cards made a switch from depicting the contemporary royalty to illustrating historic or classic figures. Then, in the 1680s, developers produced cards illustrating the coats of arms of the British peers. While the King was always the highest card in any suit prior to the French Revolution, in its aftermath, the Ace moved up in prominence.

The playing card as we know it is primarily the result of Thomas de la Rue who introduced letter-press printing to the manufacturing process and secured a British patent in 1831. Even today, his decks remain the basis for standard playing card design.

The Joker is the newest member of the deck. The jaunty fellow was added by the Americans in the 1860s to enhance the game experience for Euchre, where the Joker was the best bower or highest trump card. When the British adopted a passion for Euchre in the 1880s, the Joker made his way across the pond.

The United States Playing Card Company, then based in Cincinnati, Ohio, began manufacturing their famous Bicycle Playing Cards in 1885, with production later moving to Erlanger, Kentucky in 1894. Cards continue to serve as a wide range of needs, from inexpensive souvenirs for vacationers to desirable advertising space. Crafters have incorporated them into stencils, lampshades, garlands, and table runners — to name just a few creative uses.

Playing cards have even become important teaching and propaganda tools for the United States military. First dating to 1942, so-called “spotter decks” depicted aircraft, ships, and tanks to help US soldiers identify them, and the cards pulled apart to form maps when moistened. In 1966 during the Vietnam War, decks with only the Ace of Spades were created to demoralize and frighten US enemies.

Of course, cards are the vehicle for hundreds of games, including Poker, Solitaire, Gin Rummy, Wist, King in the Corner and Bridge. While some enjoy gambling — the cause of no shortage of uproars— others simply enjoy company and conversation over a game.

There are some who believe cards can even tell the future. Although a regular deck can provide plenty of guidance for the initiate, many practitioners prefer the more elaborate symbolism of the tarot. Some believe the original tarot cards, which arrived in Europe at approximately the same time as standard playing cards, were designed for the purpose of foretelling the future and discovering hidden truths. Rules for tarot games dating to the late 1400s and early 1500s do not indicate these purposes, but believers point to religious persecution as a reason for hiding the practice.

The first discussion of the tarot as a divination tool comes from Antoine Court de Geblin’s Le Monde Primitif. French Esoteric scholar Éliphas Lévi cemented the 78-card deck’s reputation in the 1800s; his work was later translated by British occultists A.E. Waite and his compatriots Wescott and Crowley in the early 1900s. The tarot includes 22 named cards known as the Major Arcana, as well as 56 suit cards, making up the Minor Arcana. While suit cards vary regionally, they are most commonly depicted as swords, cups, pentacles, and wands.

However, the life of cards extends far beyond games, prognostication, or even the ever-popular magic trick. Having served as mathematical aids, stiffening materials, and stationery, the history of the playing card is long and colorful. In 1689, while in the service of King James II, Baron Grace of Courtstown refused an ultimatum written on a Six of Hearts, thereby inspiring the “Grace’s Card” moniker. Irish author Oliver Goldsmith made use of the Ace of Clubs as a makeshift “IOU” while Voltaire repurposed an unknown playing card into the world’s first calling card.

The humble playing card has inspired both fine and folk art since its inception. Whether it’s the songs we sing along to, the art that makes us smile, or the villain we love to hate (looking at you, Queen of Hearts!), it’s clear the playing card’s legacy is far larger than its humble size would suggest.

Cards! They hold many of us as surely as we hold them.

Is your imagination stirring? Check out our Kickstarter currently in progress. You can pre-order the deck of cards you see here.
We’d love to keep you up to date on the Dire Multiverse projects! There are several ways we can do this: