Hi there! It’s Steeven Labeau, Concept Artist at Games Omniverse. In a previous development diary, you discovered the inner workings behind the design and development of the Mud Puppy for the Danika Dire series. Among the other creatures lying inside the Dire Mansion, I have recently completed this one, affectionately called the Sponge Toad: 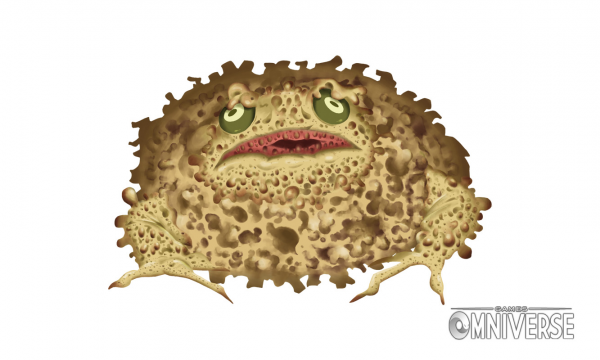 Today, I’m going to tell you how a simple concept turned into an unexpected but exciting creative challenge, which gave me the opportunity to go a bit further than what I usually, do for the studio.

Let’s have a deeper look into the process, which starts from this description written in our Design Documentation:

This creature came from the mud realm. It’s a toad, but it looks like a sponge. It camouflages itself by pulling in its arms and legs, and face, into the sponge. When it’s ready to strike or move, it pokes out of the sponge and is a toad! When you least expect it, it opens it eyes and opens it mouth. It has a long tongue that lashes out and grabs bugs. We will animate this. We need a concept of the toad hidden and one of the toads’ out.

For the inks, we’ll need the following layers:

1.7. Tongue shooting out to its full length

The first sketches are done quickly, because the Sponge Toad has common traits with existing toads. However, there are elements to take into account: 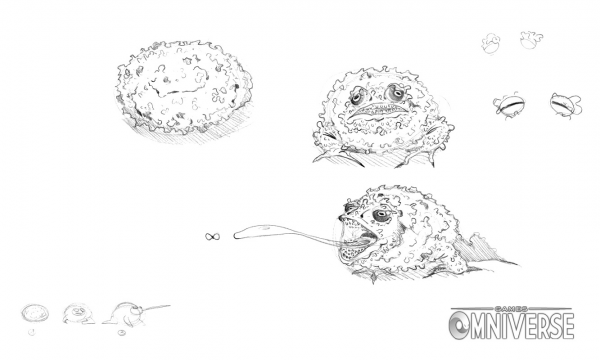 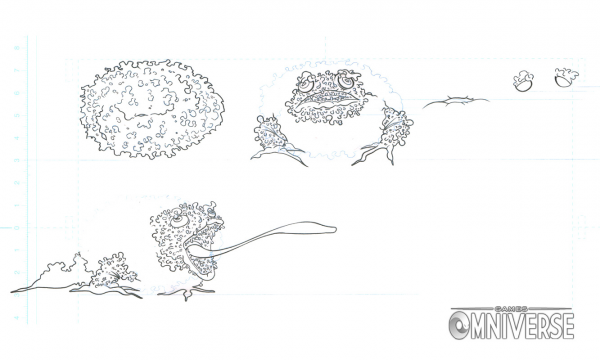 Once the sketches are completed, I get the nod to begin a penciled version. The elements that will be animated are separated at this moment, and will be positioned on their own layer at the next stage. 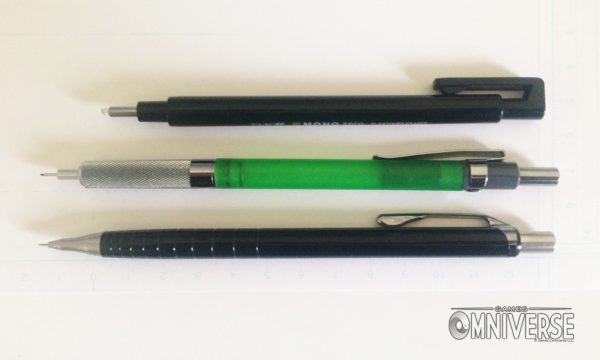 My objective during penciling is to get a result as clean as possible, because doing it early saves me a lot of time at the inking stage (you will soon understand why). For that, I use a 0.35 mm and a 0.2 mm mechanical pencil. The 0.35 mm pencil has a blue lead, and is mainly used for the construction lines. Blue lines can be easily removed after scanning the pencils: only the dark lines of the final drawing remain. 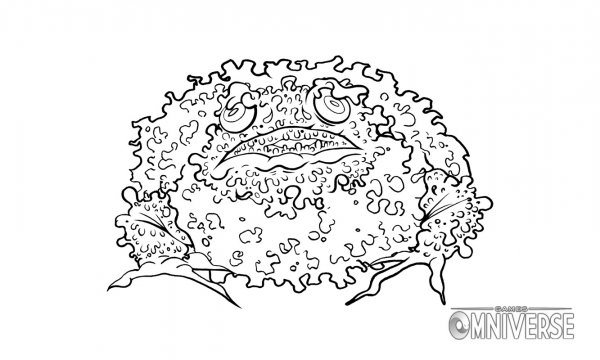 We now have all the elements which will constitute a layered PSD file. You might notice the very few differences between the penciled and the inked versions. The reason is that in this specific case, the line art itself is just the darkest version of my pencils. 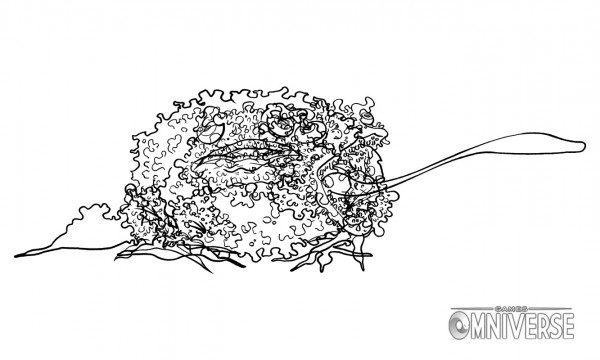 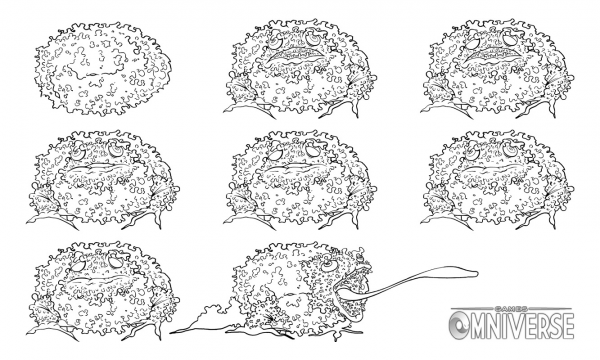 Many variants are possible depending on how layers are combined. They are verified and in the case where modifications are needed, I make them directly with my graphics tablet: revisions are generally about small details that don’t require me to restart the whole process.

When the file is validated and ready for the next step, I think that my work on it is over. And as I’m ready to move on another piece of artwork, Angel, our mastermind, finally asks me if I’d like to color it myself!

If you look at the art direction of the Danika Dire game series, it has been decided to have painted environments. The Sponge Toad is a part of these environments, so it will have to be painted. It’s not the first colored piece I do for the project, but it would be the first digitally painted one. That means I will have to use a technique I don’t necessarily specialize in, but if Angel asks me that, I’m sure she thinks I’m able to do it. Challenge accepted! 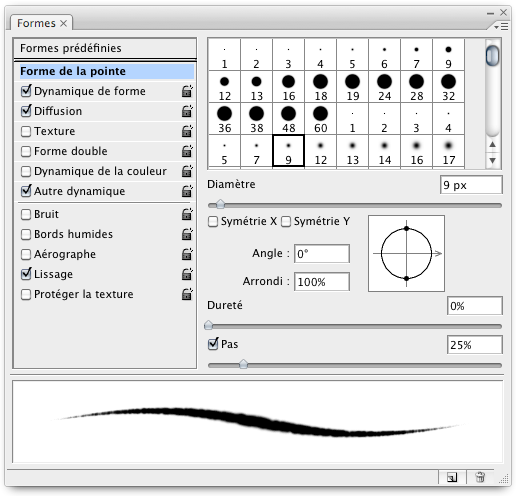 For the painting stage, Photoshop, my tablet, a custom brush with 40% transparency and the smudge tool are used.

I reduce the opacity of the line art, which now serves as a guide, before being removed at the end. It could be frustrating to care so much about the line art just to see it disappear. But the inking stage is a small part of a much bigger workflow, and the resulting file gives the colorists/painters a foundation to start with. To work efficiently, it’s better if this foundation is solid. It’s just that at this moment, I didn’t know that I would be the colorist. 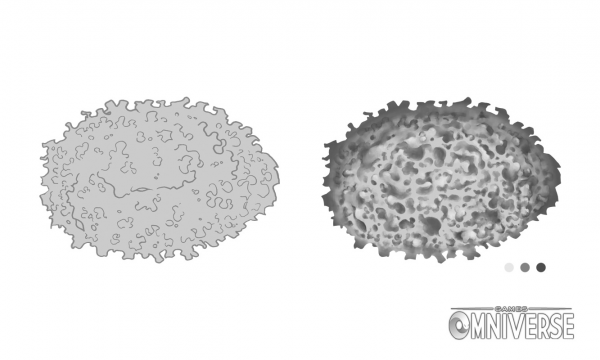 Working in grayscale mode has the advantage to help me to remain focused on shadows, volumes and contrasts. I’m not distracted by colors choices at this moment, and that’s how a gray shape begins to look like a sponge. Not so bad! 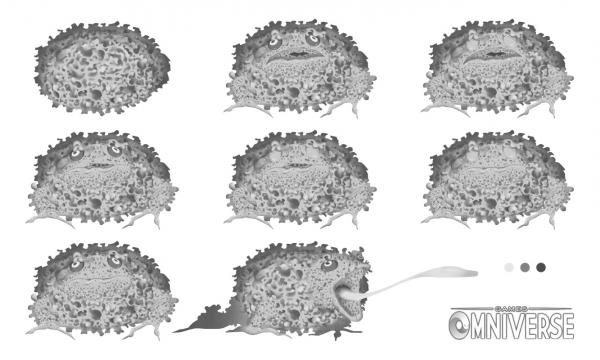 After that, I focus on the arms and the face, including its variants. The difficulty with this kind of piece is to paint the layers separately, but at the same time to make sure that everything works like an individual piece. As a consequence, details need to be balanced between each group of layers to get a harmonious result. 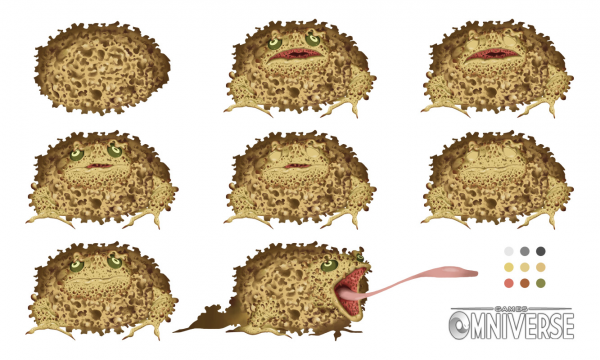 The next part consists in choosing a palette, adding color touches on each element (eyes, mouth, polyps etc.) and playing with blending modes until I’m satisfied by what I see.

I don’t want to go too far with a more realistic version of the Sponge Toad, because of the Mud Puppy. If one of these two critters appears to be too realistic, there’s a risk that we feel they don’t belong to the same game. The current result seems to be a good compromise to my eyes, but I need other pairs of mine to make sure that it deserves to go inside the Dire Mansion, and I wait for a final approval.

The few concerns I had before painting a piece like this vanish when Angel says it’s exactly what she had in mind! Phew!

At the end, Games Omniverse’s animators and programmers will take over to transform these independent layers into an animated creature, which you will be able to interact with. Perhaps revisions will be needed later, depending on the team’s feedbacks. But I’m very optimistic and I hope you’ll enjoy the Sponge Toad when you’ll find it in the game!

For any comment or if you have other question about this development diary, we would be delighted to answer you on our forums: https://forum.gamesomniverse.com/forum/main-forum/36-feedback

Thank you for reading, and see you next time! 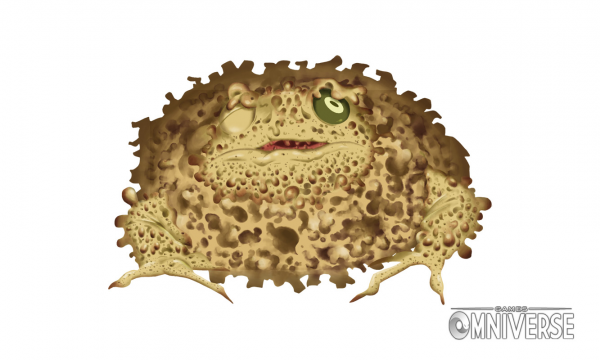