How Our First Summer Ended

It’s time once again to check in with members of the Games Omniverse staff and find out all the cool and interesting things they’re doing when they’re not working on our projects.

This summer had been full of hard work and fun, combined with a few moments of sadness.

Jason is one of our newer programmers who will be introducing himself a little later this year. He’s been enjoying playing Demon’s Souls followed by Dark Souls on PS3. “Truly a satisfying play,” he commented, “but I too started as a Thief in Dark Souls and do not recommend doing so if you have the opportunity to play it as well.”

Pamela has been churning out colors and working so well with our art director Grace that we promoted her to the Lead Artist position. However, she somehow is still finding the time to color a web comic with comics artist Matt Haley (a dear friend to Games Omniverse) as well as working on the garden in her new home. “The house is on an acre and it has tons of fruit trees,” she said, “but I have no idea what’s. I’ve figured out the pear and fig trees so far but have no clue which ones are cherry and apple.” 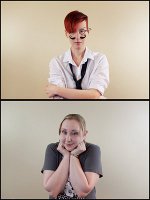 And speaking of Grace, she has been creating illustrations for Release The Hounds, a dark fantasy novel written by our development director Alison. There may have also been a binge-watching of “Teen Wolf” during their creative meetings.

Our fearless leader Angel has also been very busy this summer. In addition to being a panelist for several talks at Norwescon, she also served as a workshop critic for the Fairwood Writers group and directed audio recording of WilyWriters.com stories that will be going live in the near future on the site. Her many thanks go to her talented readers Phillip Pickard and Folly Blaine, both of whom have also provided temp audio tracks for our game.

Perhaps the biggest event surrounding Angel’s day job was the release of the Living World Season 2 content for Guild Wars 2. She has been very busy working on future releases while also enjoying the current release and doing promotional work for it, including helping to promote this great video:

New inker Dak and his fiancee/our staff writer and UI designer Alana have been learning what not to do in the kitchen while watching the newest season of “Kitchen Nightmares.” “We both love food, she’s been teaching me to cook, so we get a lot out of it, including new recipe ideas to try,” he said.

A chance encounter in a store led to one more book read for our Alpha coordinator Carol. “I was standing in a long line at a supermarket and overheard two people talking about The Amazing Adventures of Kavalier & Clay [by Michael Chabon],” she said. “Their conversation got so animated over the book that I had to give it a read.” Also on her finished pile is Damned by Chuck Palahniuk. “I have been a long time fan of Palahniuk’s transgressive writing so anything of his is an automatic read for me,” she confessed.

She also completed her first “official” 10k run for Beat the Blerch, the “fun run” race created by Matthew Inman (aka The Oatmeal) after he wrote and drew this comic. We are so proud of her!

Across the Pond, our prop artist Emmeline had a great summer. She attended four writing workshops at the C.S. Lewis Summer Institute in Oxford and Cambridge and also participated in a few comics-related panels at the 72nd World Int’l SFF Convention (aka LonCon 3).

But when she’s not attending or moderating panels, a lot of her focus is on development for a comics project called Knights of Eve while reading over 700 comics issue #1s which Marvel had given away on Comixology last year.

And finally, I was able to finally have a nice chat with a friend about “The Thick of It,” a British serial which introduced Peter Capaldi to the national consciousness. Our chat, of course, was a prelude to the premiere of the first episode of the new series of Doctor Who, starring Capaldi as the Twelfth Doctor. My live-blog during the U.K. premiere, full of spoilers, can be found here.

Concept artist Kim will still be around in an advisory capacity, but she had to step away from working on our backgrounds and design elements. But before she left, she had a great time attending Emerald City Comicon, and was pleased to have been able to meet and speak to manga artist Kenichi Sonada and ask him a few questions at his panel.

We also sadly had to say goodbye to Bridget, our former Lead Programmer who has a fantastic new opportunity that wouldn’t allow her to work on our game any more. However, before she left, she let us know exactly what our new Lead Programmer Josh and his programming team shouldn’t be doing going forward.

What are you looking forward to in the fall and winter? Any recommendations for us? Leave them in the comments!